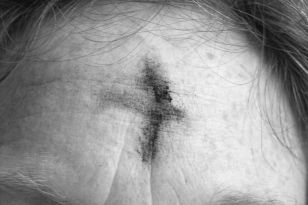 At last year’s Ash Wednesday service, my husband and I sat behind an older couple who had been our friends since we first joined the church thirty years before. The elderly pair had served in every imaginable church leadership position during their long lives. Even at age ninety-one, he still taught their adult Sunday school class. She had belonged to the same Methodist congregation since birth.

Years ago when their only child—a son—died tragically at age fourteen, longtime church members said it was the strong faith of the heartbroken couple that had led the rest of the community through the dark days of doubt. Now all these years later, they were still active in the church, supporting every youth program, mission effort, and building project. Incredibly generous and faithful, they were what most people would have described as pillars of the church.

As the first hymn of the Lenten service was announced, we watched the older couple struggle to get to their feet. It would have been understandable if they have chosen to remain seated, but they seemed determined to stand. No doubt their joints were aching and their energy was waning.

After we were seated again, we heard them discuss in loud “stage whispers” if they would go down to the front of the church for the imposition of ashes. She was concerned that she’d be slow and hold up the line. Maybe they should wait for the minister to come to them, she said. But after a brief back-and-forth conversation, they chose to go forward with the rest of the congregation.

When the moment came to get in line, the elderly woman purposely left behind her three-pronged cane. She clung to her elderly husband as they inched their way into the center aisle. At the same time my husband and I slipped out of our seats and took our places behind them in a line of familiar faces.

That’s when I experienced a holy moment. I glanced at the floor and saw the feet of this older couple. Sensible shoes, slow painful steps. I realized that we were literally and figuratively walking in their footsteps.

As the couple drew near to the ministers, I felt my eyes fill with tears. I was humbled by their powerful witness and faith. Though life was not easy, they pressed forward. They stopped and leaned on each other as they received the sign of the cross on their foreheads then began their trek up a side aisle.

Once we were seated again, I kept my eye on the line of congregants continuing to file past us as they made their way down the center aisle. There were several families with young children, single mothers, middle-aged professionals, retired empty-nesters and a large group of teenagers. I wondered if any of them had paid attention to the older couple who had gone before them. Had they seen them modeling courage in the face of uncertainty? Had they looked around to see other older adults who were also standing firm in faith?

One thing I know for sure. Caught up in our own hurried lives, we have a tendency to miss holy moments that are right in front of us. Sometimes all we have to do is look down to see the feet of those going before us in faith.