The first time I spoke with Lucimarian Roberts, I knew we were going to be friends. She called from her home in Pass Christian, Miss., to ask a question about my book, Living with Purpose in a Worn-Out Body, and we talked for over a half-hour. It was an easy conversation, as if we had known each other for decades instead of minutes. We quickly discovered that each of us had a church pew in our home. Mine was purchased at an antique store. Hers was salvaged from her church which was ravaged during Hurricane Katrina.

Over the last five years, we had many other phone conversations about all kinds of things, including the challenges of growing old. Lucimarian was a woman of deep faith, but like many older adults, on some days she struggled to find purpose as physical decline took its toll.

I was surprised when a Good Morning America producer contacted me in 2010 to ask if I could come to New York to tape a segment about aging and faith with Lucimarian and her daughter, Robin Roberts, a host of the show. It seems that Robin had discovered our friendship and wanted her mother to meet me while Lucimarian was visiting her in N.Y.

I remember watching Robin’s eyes brim with tears as she interviewed her mother about what it is like to grow old. At that moment, Robin was more a daughter than a celebrity to me. 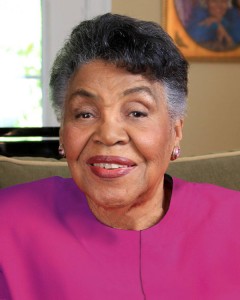 It was Robin, along with her siblings, who later convinced Lucimarian that her life stories could inspire others. In the summer of 2011, I had the privilege of spending a stretch of days with Lucimarian in Mississippi as we worked on her memoir. She would often close her eyes and lean her head back as if she was watching a film on a wall in her mind. Some stories were joyful and uplifting; others were sad and difficult to hear. All were woven together with threads of faith, Scripture and the music of the church.

Lucimarian told me that even though sifting through her life stories was painful at times, it had been a blessing because it reminded her how God had worked in her life throughout the years. It was in looking back and recognizing God’s faithfulness that she could embrace the uncertainties of how life might unfold in her last days.

I also remember the afternoon that I suggested My Story, My Song for the book title. She looked up at me and broke into a huge smile. That’s it, she said. That’s it.

In April of this year, Upper Room Books hosted a wonderful celebration tea in Pass Christian to launch My Story, My Song. Just days before, Lucimarian had been hospitalized. My prayer had been that she would recover and be able to enjoy the festivities of the weekend.

She did. As Robin described it, Lucimarian was a rock star that day. Friends and family gathered to celebrate her life stories. Laughter and joy filled the ballroom. The following day, more than 500 people lined up at a local book store to meet Lucimarian and to have their books signed. I remember thinking what a blessing it was that she was alive to hear people tell her how her life had impacted them.

The last time I spoke with Lucimarian, she was back in the hospital. She was concerned about Robin’s upcoming bone marrow transplant and said that she had to be strong for her daughter. When I received word that Lucimarian had passed away in her home with her family at her bedside, I immediately thought of our conversations.

I knew that Lucimarian had not been afraid of death. She wanted no part of a dreary, sad funeral. As she described it to me, her memorial service was to be a celebration, a real “homegoing.” I think she felt assured, too, that Robin would be strong in her own struggles, largely because of the legacy of faith she was leaving behind.

This morning, I am going to Lucimarian’s church to celebrate her 88 years of life. We will laugh. We will shed a few tears. But at the end of the service, we will stand and joyfully proclaim, When we all get to heaven, what a day of rejoicing that will be.