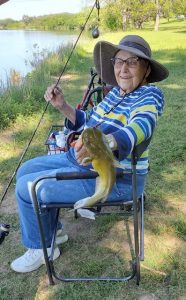 My 93 yr-old friend, Margaret Deike, lives in a quaint town in the Texas Hill Country and has a litany of things to teach us about the journey of aging. Just like her family, I call her Omi because she has a way of drawing me into her family circle as if I am one of her own.

Omi, a widow for many years, is known for her steadfast faith, quick wit and razor-sharp mind. Folks who know her well would also add that she knows precisely when to hold ‘em, when to fold ‘em, and when to walk away at weekly poker games. She is spunky and fun with a laugh that would put a smile on even the grumpiest face.

As Omi’s arthritic knee worsened in the last couple of years, she found herself struggling with daily activities. She was disappointed when she visited a local orthopedic surgeon, hoping for a knee replacement but quickly learned that this doctor refused to do a knee replacement on anyone older than 85. Frustrated by her situation, she began to feel like a wheelchair at a nursing home was her only option.

That’s when her granddaughter, an ER nurse practitioner in Corpus Christi, stepped in to help Omi get a second opinion from an orthopedic surgeon in San Antonio. This doctor—a man in his 70’s– saw Omi as more than just her age. He saw her attitude. After passing a plethora of mental and physical tests, the doctor gave her a green flag for knee replacement surgery and a reason to be excited about late life. Not only did she endure the surgery and rehab, completing her exercise regime with great determination, she is back to living alone and doing the things she loves, including playing poker and fishing in the Perdenales River.

Don’t misunderstand. Not everyone can endure major surgery and rehab at age 93, but Omi reminds us that attitude has a lot to do with how we handle the challenges of aging. I am confident that even if she had been unable to have the knee replacement, Omi would have sought ways to bring joy into her new environment.

When asked to share her wisdom for the journey, Omi talks about her deep faith in God being at the core of her hopeful attitude and her ability to persevere. She reminds her aging peers not to give up, to face their fears with faith, and to keep a vibrant prayer life. Embrace the reality of death but live fully for today, she says. And if you still need a big dose of inspiration, just pull up a chair next to Omi on the banks of the Perdenales River.