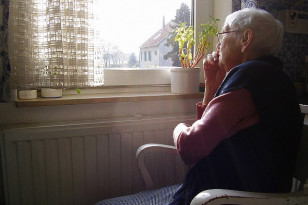 A few weeks ago I received a Christmas letter from a long-married couple in their nineties. I had to smile when I came to a particular sentence. “This year we managed not to be patients in a hospital,” they wrote. For some readers, it might have seemed an odd thing to mention in a holiday card. But to those adults who are already in that late season of life, my friends’ proclamation made perfect sense.

Over the last few years, the husband and wife have each struggled with a litany of age-related ailments. Then a couple of years ago they were in a car wreck that landed the wife in the hospital for a month before spending several additional months in a rehabilitation center for extensive therapy. I knew this was not how the elderly couple had hoped their twilight season would be. He was frantic trying to navigate confusing hospital hallways while she wondered if she would ever have the energy to complete even one of the exercises in her therapy class. But over time, they were able to return to their normal routine at home.

This year when I chatted with my friends about their Christmas letter, they shared honest thoughts about the realities of growing old. They talked about what it means to live faithfully in a season that involves so much uncertainty and stress. Heeding the angel’s words, “Do not be afraid,” was not always easy, they said.

Our conversation reminded me of something another older friend told me not long ago. She has also had to deal with a long list of medical issues, especially in recent years. According to my friend, any week without a medical appointment is a great week. Her life is organized around medical appointments, typically two or three in a week. She confessed that the most worrisome part of her life is waiting for another round of test results and wondering how it will impact her shrinking independence.

I also thought of another elderly friend who once refused to push the button on her medical alert necklace when she fell because she knew an ambulance would be dispatched. In her way of thinking, she was almost certain she had not broken a bone. She just needed help getting up. Her real fear was of being whisked away to the emergency room amid pulsating lights and sirens. Thankfully she managed to crawl across the room to a sturdy chair and was able to pull herself up.

Now don’t get me wrong. My friends, like many older adults, are very thankful for doctors and medical advancements. But they are also wise enough to accept the fact that bodies wear out and a crisis is likely to come in spite of the best medical care.

When I speak to senior adult groups, I often ask what things they fear or dread most about growing older. They speak about the fear of being left alone. Some talk about the fear of outliving their money. But the most common fear is of lingering in a state of dependency. In fact, I have discovered a general theme among older adults that goes like this: I’m not afraid of dying. I’m afraid of the in-between.

Even as faith-filled Christians, older adults question how life will unfold. They wonder if a health crisis will cause them to be dependent upon others for a long stretch of time or if they will eventually have to move to a care facility. But even as they silently ask these questions, they are reminded of the biblical mandate to trust God in all things.

As the church, we can help older adults embrace this tension. We must begin by acknowledging their fears. Only then can we help them refocus on God’s promises through scripture, study, and prayer.

We can also help older adults cultivate meaningful relationships. A network of family and close friends is a great deterrent to fear. Just taking an older person to visit a longtime friend in rehab can be a great source of comfort and encouragement to both older adults. Certainly, the church has a special calling to help older adults face the “in-between.”